The Centre for Sport and Sustainability is pleased to house the Olympic Games Impact (OGI) Study Reports for the Vancouver 2010 Olympic and Paralympic Games. The OGI project is now required of all Host Cities by the International Olympic Committee (IOC). The project has three main objectives:

OGI is an indicator-based monitoring and reporting system that is grounded in the concept of sustainability. OGI uses 126 indicators to measure the economic, social, and environmental conditions of the Host City/Region/Country. There are 80 context indicators, and 46 event indicators.

Each Games organizing committee is to present its findings in a series of four reports (baseline, pre-Games, Games-time, and post-Games) that spans 12 years, beginning two years before Host selection and ending three years after the Games. The final post-Games report, planned for 2013, will look at the long-term impact of the Games. 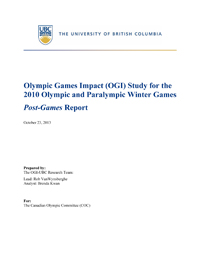 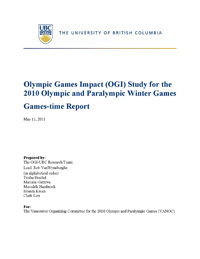 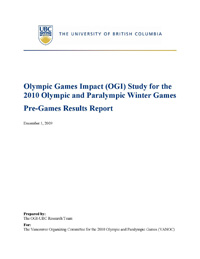 This report provides the OGI indicator results in the pre-Games period.
Download the Report
View the UBC News Release – December 1, 2009 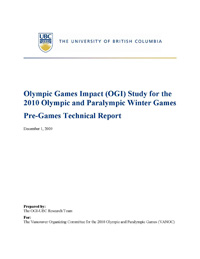 This report describes the indicators that comprise OGI.
Download the Report 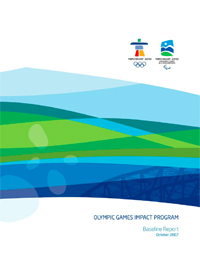 Includes measurements of the region 9 years before the Games (2001).
Download the Report