From Oct. 31 to Nov. 3, scholars from around the globe converged in Vancouver for the 39th annual meeting of the North American Society for the Sociology of Sport and a number of emerging and established scholars with ties to the CSS shared their research with an international audience in attendance. 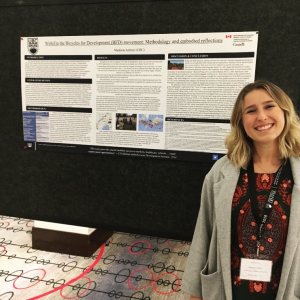 Nikolaus Dean (nik.dean@ubc.ca) and Ljudmila Zaletelj (milly.zaletelj@ubc.ca), each from the Bundon Research Group (School of Kinesiology, UBC), also presented on Thursday. Dean, a doctoral student, shared some of the findings from his recently-completed MA thesis with a presentation titled ‘”If I can still move, I can still surf!”: Exploring surfers’ understandings of concussion in Canadian surf culture’ and Ljudmila (Milly) presented some preliminary findings from her MA thesis, titled ‘Disability in the gym: Perceptions and understandings of individuals with disabilities’.

On Friday, November 2nd, Devra Waldman (devra@alumni.ubc.ca), doctoral candidate and member of the Sport, Environment, Peace, & Media Research Group, presented ‘Men, money, and calculated manipulation: Intersections of informality and exception in the building of a sport-focused community in the ‘Millennial City’, a paper based on her dissertation fieldwork in India. The day also included a presentation from Jesse Couture (jesse.couture@ubc.ca), a doctoral student and Research & Information Assistant for the CSS, who presented a paper titled ”Get Active, Save Lives’: Self-tracking, kids, and the commodification of play‘. Friday also featured a presentation from a collaborative team of academic researchers, entitled ‘The influence of provincial governments in Canada on the development of disability sport: The case of British Columbia’. Presenters including Dr. Andrew Hammond, Dr. Tim Konoval, and Joseph O’Rourke, each part of the Bundon Research Group, along with industry partners, Dr. Caitlin Pentifallo-Gadd and Shawna Lawson, each from viaSport BC.

On Saturday, November 3rd, doctoral candidate Shawn Forde (shawn.forde@ubc.ca), also with the Sport, Environment, Peace, and Media Research Group, shared some of the findings from his dissertation fieldwork, based in South Africa. His presentation was titled ‘Youth Day Soccer Festivals in South Africa: Commemorating the 1976 Soweto Student Uprising’.

NASSS Night at the Movies: ‘Mount Gariwang: An Olympic Casualty’

This year’s NASSS conference also featured the premiere of a CSS-supported documentary film titled ‘Mount Gariwang: An Olympic Casualty’. Held at the Plaza Ballroom of the Hyatt Regency hotel, the event drew a full house. Following the screening, the filmmakers in attendance discussed the process of creating the short film. 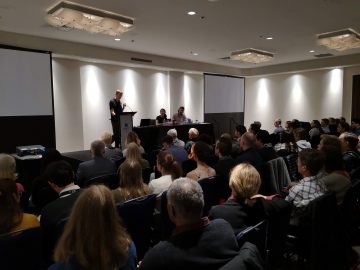 Dr. Brian Wilson, Director of UBC’s Centre for Sport and Sustainability and Professor in the School of Kinesiology, welcomes the NASSS audience, alongside filmmakers Liv Yoon and Jordan Wade.

This documentary was developed through a collaboration between Vancouver-based journalists and filmmakers Jordan Wade, David Gauthier and Connor Lang (see Jordan and Connor’s company Storyhero Media) — and Liv Yoon (doctoral candidate in UBC’s School of Kinesiology and Liu Scholar at the Liu Institute for Global Issues) and Dr. Brian Wilson (Director of UBC’s Centre for Sport and Sustainability and Professor in the School of Kinesiology).

Based on Yoon’s doctoral dissertation research, the documentary includes original interviews conducted in February 2018 in the lead up to, and during, the Games, as well as original video footage at Mt. Gariwang and other relevant locations around PyeongChang.

This short documentary grapples with questions that transcend sport mega-events and geographical boundaries, such as: what inequalities are perpetuated in environmental controversies?; how are environment-related decisions made and whose voices are featured or marginalized in the process?; what assumptions underline dominant approaches to ‘sustainability’ and how do they influence our ability to imagine alternative and preferred ecological and socio-political futures?

Aligned with SSHRC-funded research on Sport Journalism, Peace and Environmental Issues, this project was an attempt to implement a set of ‘best practice’ criteria associated with environmental journalism and communication, while pursuing knowledge translation and a public sociology activity through media production.