Centre for Sport and Sustainability
Home / 2022 / March / 02 / Event Summary: David Goldblatt on Sport and the Environment

Event Summary: David Goldblatt on Sport and the Environment

Notes and Timestamps for talk by David Goldblatt, Thursday Feb 3, 2022

About the speaker: David Goldblatt is a British writer, academic, and journalist. He is the author of The Ball Is Round: A Global History of Football, The Age of Football: The Global Game in the 21st Century, and Playing Against the Clock: Global Sport and the Climate Crisis. David is a regular visiting professor at Pitzer College, Los Angeles, and a chair of the NGO Football for Future.

To register to attend upcoming webinars in the series, you can go here (and scroll to the bottom of the page, where you will see registration information). You will receive information about how to access the webinar after registering.

Read on for summary of David’s talk, which was held virtually on February 3, 2022. See timestamps that correspond to Youtube video. 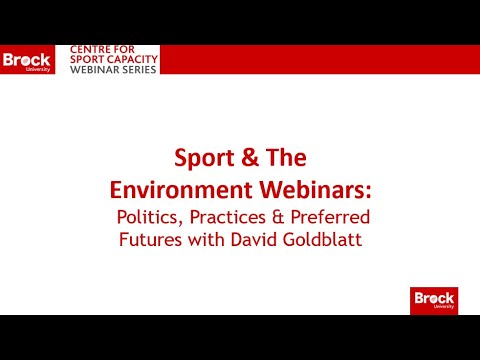 Brad goes on to acknowledge that this speaker series is a partnership between The University of British Columbia’s Centre for Sport and Sustainability and Brock University’s Centre for Sport Capacity. He thanks Julie Stevens, Jess Crosthwaite, Georgia Rudolph, and Jeanette Steinmann, students involved in organizing the event. He acknowledges the support received from UBC’s Grants for Catalyzing Research Clusters (GCRC) fund, that supports the Mobilizing Sport and Sustainability Collective.

Brad goes on to introduce David Goldblatt, noting that David is a leading voice on the topic of sport and the environment, and that his recent report has accounted for both the ways that sport is impacting on the climate and climate change is impacting on sport.

David thanks Brad for the introduction and explains that since he is the first speaker in the series, he will begin with an overview of topics related to sport and the environment. He explains that he will overview the kinds of problems that global sport is going to face over the upcoming decades, as the climate crisis worsens. He will then, second, briefly address the scale of the global sport industries’ carbon emissions. Thirdly, he will discuss some background on governance of environmental issues in the sporting world and offer an overview of what has been happening to address environmental issues related to sport in the past couple of years. David explains that his fourth topic will address why sport is such a powerful tool. Finally, he will share some thoughts about what the big issues, challenges, and debates will be over the next decade.

In this section, David outlines a range of sport and environmental problems and features a number of compelling examples.

The two main environmental problems David identifies that will impact the future of sport are rising average ambient temperatures and extreme weather events. Related to rising average ambient temperatures, David shows that winter sports will be most affected, followed by sports played outdoors. He stresses that professional sports will not be the only sports affected – grassroots sport will be impacted too. For example, it will be hard for local teams to continue soccer matches when it is 40-50 degrees Celsius outside.

David also shares a number of examples of flooding, wind, and rain events that have affected sports such as surfing, sailing, and soccer, and he cautions viewers that these extreme weather events will continue to happen.

Here David briefly highlights the high, albeit unknown, amount of carbon emissions produced by the sports industry globally. He explains that while emission estimates for many leagues are now being calculated, carbon emissions produced by the sport apparel industry are completely unknown and are also unchecked. He highlights the amount of emissions related to transportation in sport. He explains that, according to his estimates, the sport industry likely has the same amount of emissions as a country like Spain or Poland.

In this section David explains that until recently, concerns about the environment were not on the radar of many sport associations. He suggests that winter sports and golf have been engaged in sport and environment conversations for a while, with other sports joining this conversation only very recently.

David shares that in the 1990’s, the Olympics added ‘environment’ as a core value, and in the last 10 years the IOC and FIFA have begun to do carbon audits and engage with questions around the climate crisis. He suggests that the UN Sport for Climate Action Framework, created in 2015, was a key change from above. Recently at COP26 this framework was tightened up and more signatures were added to it.

David also shares that personally, he has noticed a large upsurge in general interest related to sport and climate issues compared to when he started writing about sport and the environment in 2019.

David goes on to highlight some of the strategies that sport organizations are using to combat the climate crisis currently. He explains that many professional sports leagues are promising carbon neutral tournaments and engaging with carbon neutralizing tactics. He also identifies that there is pressure coming from below. He shares that in football, fan groups are calling for more sustainable stadiums. He explains that the power of athlete activism is being used in relation to sport and the climate crisis for the first time. He shows that broadcasters have also become involved in the climate crisis, and that he had seen a spike in climate and sport-related stories in the past two years.

David outlines some reasons for why this shift to environmental action has occurred in sport. He argues that sport has a unique reach and that sportspeople speaking on climate-related issues may get through to people in ways that feel more authentic than when coming from politicians or other leaders. He suggests that sport offers a venue where collective action is still possible because people understand that winning is a team effort. He explains that in sport, hope is something people believe in and are willing to fight for—people believe that a last-minute turnaround is possible.

In this section David focuses on the key issues that he suggests the sports world should focus on in the coming years.

David shares some final thoughts. He explains that the scale of change related to the climate crisis that is possible is extraordinary, and that this response is needed from the sporting world.

Brad thanks David for the talk and addresses some questions from the online discussion forum.

Q: Is there anything individual cities can do in relation to sport and the environment?

A: David explains that cities, if they host sporting events, can bring a strict emissions policy. Cities need to not only try to change the ‘bads’, but emphasizing the ‘goods’ too – he suggests that cities can emphasize that climate-friendly solutions will be good for everyone.

Q: What have athletics done in response to the climate crisis?

A: David explains that World Athletics is a leader in addressing climate issues and he highlights a number of the changes they’ve made. He suggests that the next question is addressing how to move from WA addressing climate change to every athletics foundation in the world also addressing it.

Q: External auditing – is this plausible/a good next step?

A: David explains that this is the problem with the IOC— no one’s checking in on them. He suggests that there is a real need for external auditing, or a model where the league audits individual teams/clubs.